Le Temps, a swiss newspaper, gave an account of N3krozoft’s perfomance in Ljubljana. Its journalist Michel Masserey, who was sent there to cover Slovenia’s adhesion to NATO, mistook the N3krozoft show for an event linked to the official festivities. Nevertheless, the swiss journalist wrote an article published the following day:

” Ljubljana, april 8th, 2004.
Slovenia became a member of the Atlantic Alliance yesterday. Whereas in the center of the slovenian capital, near the Cankarjev dome, Janez Drnovsek, President of the republic of Slovenia, pronounced a speech underlining the advantages that would not fail to bring adhesion, was held in the Kapelica gallery, a few hundred meters from the dome, a multi-media performance of the collective N3krozoft Mord, touring the Balkan area during april. In an overheated atmosphere, the artistic happening brought an unexpected counterpoint to the great political mass. (…)

The show is organized from a large table where the three artists handle an awesome amount of heteroclite material – a tangled mess of wires, microphones, medieval artefacts, surveillance cameras, teen magazines, encyclopedies and electronic devices which process the aural and visual signals. The result is propelled on a screen and through loudspeakers, capturing the attention of the audience, who at the same time is always tempted to peek at the table where the artists carry out a worrying ballet. A chaotic and fragmented account gradually emerges, creating unexpected bonds between various elements: NATO, Netochka Nezvanova, the year 1904, the cables and the mixing tables, the nouvelle vague, 2001 a space odyssey, Wilhelm Reich, Alfred Korzybski, the books and the ibooks, the Balkan conflicts, the adhesion of Slovenia to the European Union…” 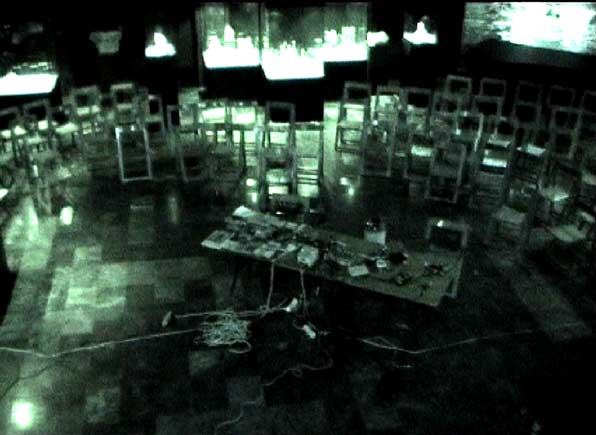