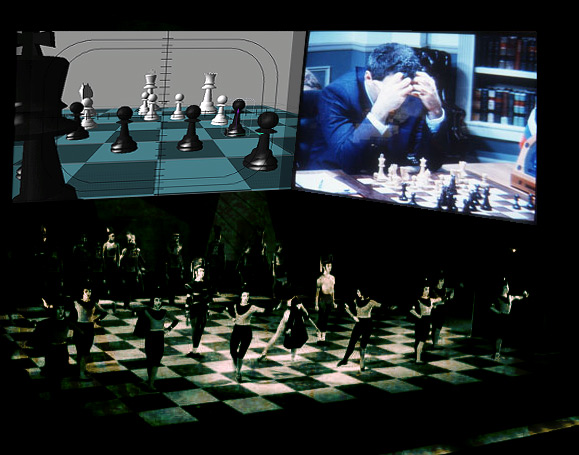 As in earlier performative works, recorded textual source material (both historical and fictional) plays an important role, from the transcripts of live commentaries that were aired on American and Russian national television, to the log files of Deep Blue which were published by the IBM corporation.

The performance confronts the audience with a fast-paced mixture of multiple video projection, choreography (breakdance meeting russian folklore), an operatic score of voices (featuring TV commentators, diary entries of Garry Kasparov, as well as the internal rumblings of Deep Blue, rendered in the iconic voice of HAL, the board computer in Kubrick’s 2001). The Dubai Chamber Orchestra provides an eclectic soundtrack, which features an exhilarating adaptation of the infamous Tetris game score.

Co-commissioned by the Dubai Digital Art Centre; in association with the Dubai International Art Center; the Advanced Computing Center at The American University in Dubai (AUD). Additional support provided by the Mohammed Bin Rashid Al Maktoum Foundation and the Emirates Directorate for Science, Technology and Industry.